Given a feature matrix $X$ of shape $n \times p$ that is centered, i.e. column means have been subtracted and are now equal to zero, typical use cases of PCA include:

Conceptually, it’s important to keep in mind that PCA is an approach of multivariate data analysis and both EVD and SVD are numerical methods.

Principal components are the projections of the original feature matrix on the principal directions and can be obtained with $XQ$. The proportion of total variance that the $i^{\text{th}}$ principal component explains is $\frac{\sigma_i}{\sum_{i=1}^{i=p}\sigma_i}$.

Below is an implementation of PCA through EVD in Python:

Compare with the above, we know that columns of $V$ are the principal directions, and the $i^{\text{th}}$ eigenvalue is $\lambda_i=\frac{\sigma_i^2}{n}$. The principal components can be obtained with either $XV$ or $U\Sigma$.

How is this better than the EVD implementation?

Below is an implementation of PCA through SVD in Python:

We will use the Iris flower dataset for an illustration of how PCA works as an unsupervised learning tool to help understand the data.

We will load the Iris dataset from sklearn.datasets. The feature matrix contains 150 observations across 4 attributes. Each row contains the length and width measurements (in cm) of the sepal and petal of an iris flower. The target is the type (1 out of 3) of the flower, but we will only use it for visualization.

Load the dataset, perform data preprocessing, and apply SVD. An essential question in preparing for PCA is whether to standardize the dataset (i.e. ensure the standard deviation of each column is one) on top of centering. From my perspective, if the features are on the same scale, standardization is not necessary. Hence, we would just center the feature matrix below.

We can see that the first principal component explains over 90% of the total variance and it’s heavily dependent on sepal and petal length. This means that most of the variations in our data can be accounted for with a linear combination of these two features.

Using PCA as a dimensionality reduction or feature engineering tool will generally harm the interpretability of the results. When the number of features is much higher, each principal component is often a linear combination of too many distinct original features and hence hard to define.

To see the effect of standardization, transform the feature matrix so that each column has a standard deviation one and repeat the visualization. 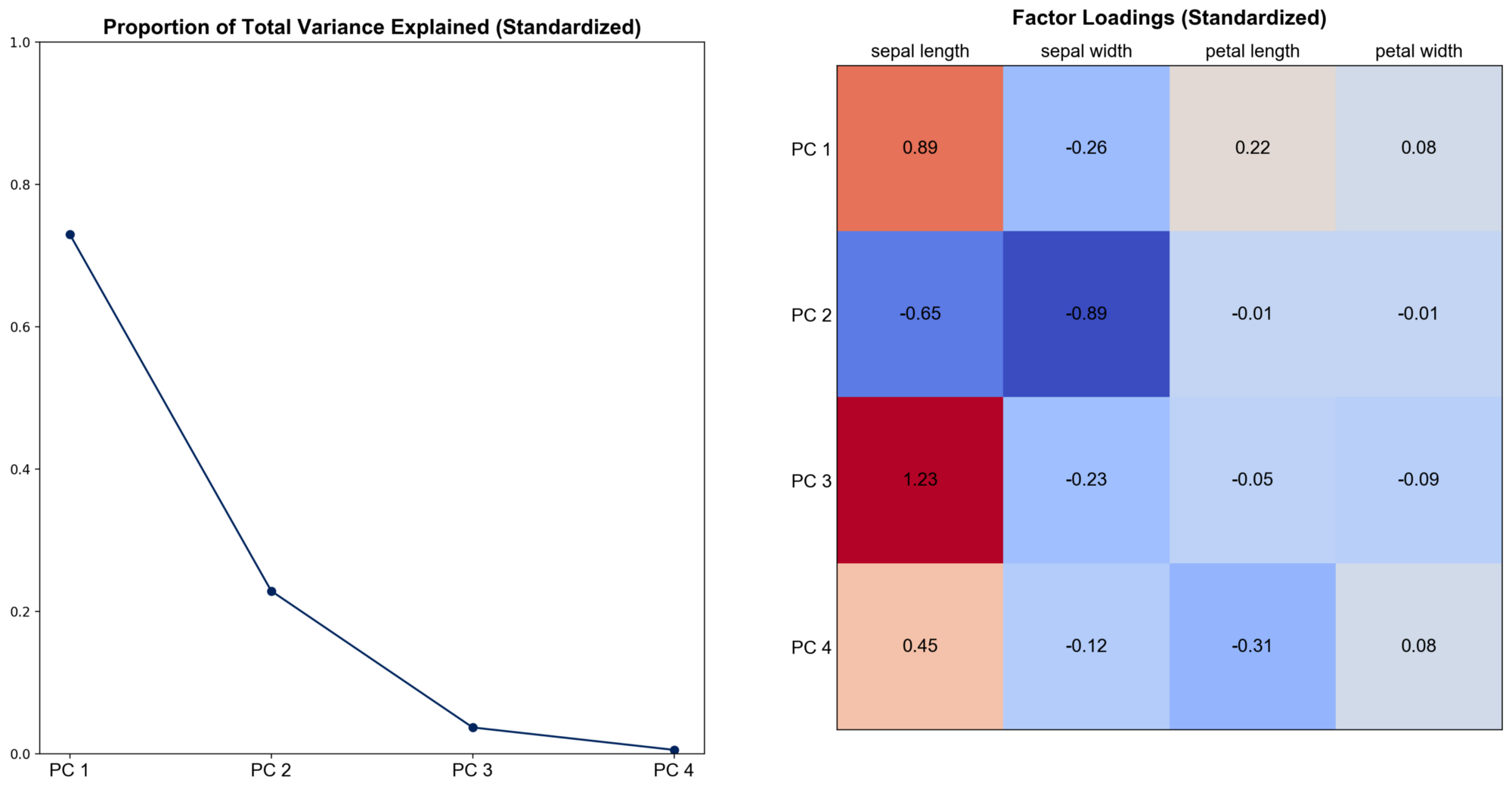 We can see that the results change quite much. Now the first principal component can only explain nearly 75% of the total variance, nearly 95% combined with the second. Sepal width becomes more important, especially for PC 2. Hence, there is no universal answer to the question of whether we should perform PCA on the covariance or the correlation matrix. The “best” method is based on a subjective choice, careful thought, and some experience.

This blog was originally published on @Medium with @Towards Data Science at this link.